You may know how I feel about web comics, especially the gag strips. But then there's Digger. 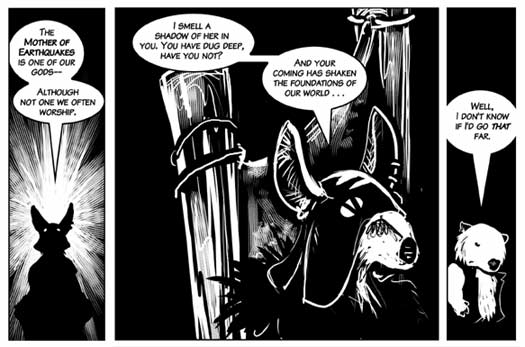 Digger is a wombat, and within the first five pages she has gone through a patch of "bad earth" that leaves her loopy, been chased by threatening voices that may or may not be hallucinations, and surfaced in a temple facing a statue of Ganesh, elephant-headed god of compassion, who says that he has been expecting her.

Later on she meets a somewhat deranged hyena named Ed, a demon child, some warrior monks, and more hyenas, organized into a matriarchy. And then stumbles on a dead god, whose priests decide to kill her.

The tone is frequently comic-- Digger herself is nonplussed and a little exasperated at the odd characters she meets-- but there is also a developing epic plot... there always is, isn't there? Remind me to write a fantasy story in which absolutely nothing of import is at stake.

Nonetheless, it's charming and well written. The art is sketchy but sure-- she's very good at making a few squiggles and blotches stand in for greater detail, which isn't as easy as it looks. I particularly like the way that she uses white-on-black as often as black-on-white... somehow very few artists seem to think of this.

Through the fantasy, a fair knowledge about actual wombats and hyenas shines through. And they are good choices: wombats do make extensive tunnel systems, and they're strong, extremely tough creatures-- and hyenas are even tougher. They eat and digest bones, they are born with teeth and often kill their siblings, they steal cubs from lions, and they give birth through the clitoris. No misprint-- look it up.

My one complaint would be that the tempo is a bit rambling. With each new crisis, Digger goes around and gets the opinion of all her friends, a good policy no doubt, but not necessarily good storytelling.

Update: Digger is done now, so you can read the whole damn thing, or buy the TPBs. (Curiously, given my complaint about rambling above, the last bit of the story pretty much flies by.)

No one wants to hear about your dreams. Why? Well, they're boring, pointless, and rambling, yes. But the real reason is that you don't distill them down into brilliant little four-page comics.

Reklaw has been doing these for ten years, as a weekly web comic called Slow Wave; a print collection is available as well, renamed Dreamtoons.

They're almost shamefully fun-- surreal, of course, but also extremely funny. (They're all real dreams, sent in by readers.)

You could write a passel of dissertations on the material-- for instance, the one where a guy dreams of being with Bill Clinton, then realizes that Clinton is his dad, and passes in four panels from excitement at being with the President to resentment that his dad doesn't spend more time with him. There's the usual dreams of entrapment, failure, nudity, and searching. On the other hand, there are plenty of dreams that are just outright strange: the apartment building in the shape of a chicken; the time travel Volkswagen; the constellations in the shape of eyelash curlers and cooking badges...

It's a little surprising how many dreams involve celebrities. Have these really become such fixtures of our dream life? But perhaps this is an artefact of Reklaw's selection process. Most of our dreams are about people we know, and thus of less interest to outsiders.

Reklaw can draw, which helps make all this work. (What he can't do, apparently, is think up a convincing nom de plume.)

Since I have to write a bit more to make the illo look all right, I'd might as well mention one of the best web comics out there -- the Perry Bible Fellowship.

The PBF has a nice shtick: every week it takes some aspect of our collective media inheritance-- fairy tales, Japanese cartoons, video games, science fiction, myths-- and applies a little twist of failure or horror. Innocence is betrayed, heroes turn coward... at least evil doesn't triumph either, as the priests resurrecting an ancient sorceror find: all he wants is TV and junk food.

The first few cartoons use simple figures, but Gurewitch soon progresses to expert pastiches of a wide range of styles.