You never know what Kyle Baker is going to do next; he's one of the few major comics artists who doesn't depend on recurring characters. He became known for Cowboy Wally and Why I Hate Saturn; his previous work, I Die At Midnight, is a screwball comedy about a man who's taken poison and now regrets it; his latest is a retelling of the story of King David. 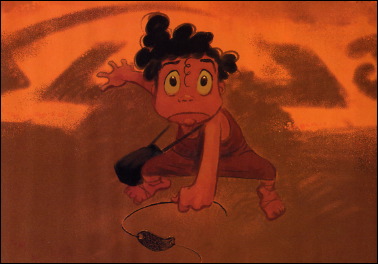 It's an amazing work; it's light and irreverent, and yet the story is straight Bible. (Reading it, I kept going back to 1 Samuel to see if such and such was really there. And it was.)

For those who are theophobic-- Baker is not secretly trying to convert you. It's just a great story: shepherd boy with a gift for music and ass-kicking (that would be David) befriends the King, kills his enemies, and marries his daughter; the King then becomes suspicious of his popularity and exiles him into the wilderness. Reduced to feigning insanity to escape the Philistines, and begging landowners for a few extra sheep, he nonetheless rises to become King, makes the name of the Lord feared, and then blows it all with some extracurricular sex.

Baker throws in a good deal of his trademark wit, and also finds some inherent in the text (the story of Nabal, for instance). He blasts away the Sunday-school dustiness from the story:

"We can't send a kid in there!" says the guard, "I wouldn't even go in there myself!"

"It'll be okay soon as he plays the harp! Open the door!"

"How's the kid gonna play harp with his arms torn off?" asks the guard. "Remember the Kenite?"

"The Kenite was a lousy harp player! I almost killed him myself! I'm telling you, the kid's great! He played my cousin Rose's wedding. Open that door!"

Baker's art has improved with each volume. King David is impressively drawn, though he's chosen some rather dark and lurid colors. I have my doubts about the computer-aided comics thing, but I think it works here, because Baker can draw. His style is neither realistic nor cartoony, but one of expressive caricature.

The future has changed immensely over time... it used to be either straight utopia (Buck Rogers) or dystopia (the X-Men's Sentinels); but lately it's been settling on a hopped-up merger of the two. Spider's future (of indeterminate date) is wealthy and powerful-- household appliances can make anything you want out of raw atoms, while your genes can be altered to cure cancer or eliminate the need to eat. At the same time it's infinitely crazy, violent, and corrupt. In other words, it's like the present, only more so.

When we meet Spider, he's a shaggy, garishly tattooed nudist in a mountaintop hermitage; he returns to the city only because his publisher is demanding that he write the books he owes them. He plunges into an extremely red-blooded form of journalism-- it's rare that he gets through a column without a few fatalities.

The stories zip by with energy and humor and plenty of gore. Some are pure satire (Spider watches TV for 24 hours; Spider makes fun of silly religions; Spider causes the President some trauma; the UN suppresses the French for resisting the spread of English); but pleasantly often there's some actual sf involved: an alien colony sells its genome to humans who want to become half-alien; there's a fad for downloading your mind into a cloud of nanites; slices of the past are maintained in reservations.

Sometimes the épater la bourgeoisie gonzitude gets out of hand. A story about cryogenic revivals unable to adjust to the future is merely self-indulgent, since none of the things Ellis tries to schock us with seem all that hard to get used to. The religion story is also weak-- the riffs are clever enough, but there's not much satirical payoff in inventing absurdities and pointing out how absurd they are.

Robertson's art is suitably frenetic and grimy, and his faces are great. It suffers a bit from the Big Comics house style-- busy and garish. The machines and cities look haphazardly assembled; Robertson lacks the design sense of a Moebius or a Mézières.

Ultimately I think the comic succeeds because Spider is a friendly bastard to spend time with. In this, actually, Ellis is a step above Moebius, who's not that great a writer. If only they could get together...

This just in:The above review was based on the first two books; I've now read the next four. All four deal with an election-- the choice is between the Beast and the Smiler-- and its aftermath, and in general move from the "gonzo" to the "journalist" side of the equation. There's little of what I called the self-indulgent element above-- though there's also less pure sf, as Ellis emphasizes political satire only a few notches beyond current reality. What sf is present reminds me of Harry Harrison's Stainless Steel Rat series-- there's the same sense that no matter how seamlessly high-tech the future becomes, there will always be ways to work outside the system.