Cho's University of Maryland strip, University2-- available as a trade paperback, University2: The Angry Years-- was anarchic, beer-soaked, and hilarious. A quartet of animals-- Frank the duck, Ralph the hostile gerbil, Dean the pig, and Leslie the lima bean-- is mistakenly shipped to the admissions office; they promptly enroll, and join a frat. Besides a few other fratboys, the only other major cast member is Brandy, the busty babe that Frank falls for.

I have about zero interest in frat life, but I love Cho's strip-- not least because he revels in showing it at its worst, catatonic hangovers, projectile vomiting, sleazy pick-up lines, filthy bathrooms, and all. Ralph and Leslie keep things lively with practical jokes, putdowns, and yo' mama jokes; Dean gets kicked in the nuts by angry coeds, and Brandy discovers that she has a taste for short waterfowl.

Cho is an amazing artist... I've seen more than my share of college strips, and none of them were half as good at rendering or cartooning. It is a bit disconcerting that the women are all rendered as over-endowed babes, while the men are cartoons-- or cartoon animals. It's what Alison Bechdel points out as the "men are normal, women are a separate species" cartooning meme. Still, it works in University2, largely because it reproduces the fratboy mindset: to these lugs, whose world otherwise consists largely of television, beer, and the porcelain bus, women are a mysterious other species. And to his credit, Cho never makes the women bimbos. Brandy is shown as intelligent-- though she never gets the good lines.

After college, Cho reengineered the strip into the syndicated Liberty Meadows. It was apparently felt that John Q. Public was able to accept talking animals, but not talking animals enrolled in college and dating brunettes; and so the strip is now set in an animal sanctuary, and Frank is now a short but decidedly human doctor. (Also, Ralph is now a "midget circus bear"... gerbils are too weird?-- and Leslie is a bullfrog.) To retain the duck factor, however, a childish duckling named Truman was added.

In general the humor has been toned down a notch, and everyone's gotten a shave. Cho's drawing has only improved with time-- he's one of the few newspaper artist who can draw an impressive nature scene, or fill the Sunday strip with accurate parodies of the pulp comics of yesteryear. Brandy is still a bit of an alien species, but at least Frank now joins her in Well-Rendered Land.

The college strip was more madcap, but also more limited in subject. Liberty Meadows has a number of new elements: Julius the director's feud with man-sized catfish Khan; Truman the duck (for excursions into Mutts territory); Calvin-like fantasias of giant apes and dinosaurs.

It's one of the funniest newspaper strips out there... if your newspaper has the gumption to print it. If not, it's available as a comic book, which has the additional advantage of printing the original punchlines when the syndicate censored them. It also reads better in bulk, when the occasional misfired joke can be skipped, and the slapstick sequences can build some momentum. 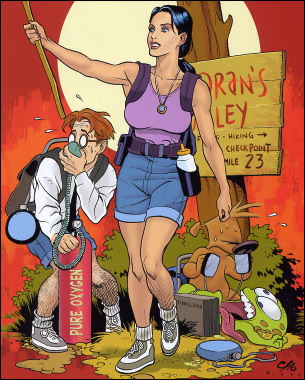 This just in: Apparently the cartoon literati just don't dig Liberty Meadows. The rag that thinks Dennis the Menace is a classic, The Comics Journal, ran a review dissing Cho for bad drawing, of all things. Have they looked at Cho's work? (See sample at right.) Have they looked at what passes for comic art elsewhere on the newspaper page?

The word on the net is that Cho is a shameless plagiarist. The usual source mentioned is Bloom County; TCJ even listed character-by-character matchups... if they really think Frank is much like Milo Bloom, or Brandy is a rehash of Lola Granola, they need their critical front-end realigned. (Bloom County was widely accused of copying Doonesbury. So, is Liberty Meadows a third-hand Doonesbury?) Comics fans should be capable of a better analysis than "It has a mixture of animals and people, so it's the same as Berke Breathed."

The best answer to this canard, however, is to read University2. The syndicated strip is very obviously a refit of the college strip, which is completely unlike Bloom County. (No, Steve Dallas doesn't make Bloom County a frat strip, any more than Schroeder makes Peanuts a music strip.)

Franson is one of the steadiest of minicomics creators; Liliane, half the size of regular comics, has reached #32. There are now two collections available, Assume Nothing and Teaching Through Trauma.

Unlike Alison Bechdel, Franson's comic is autobiographical, centering on Liliane, a Canadian "bi-dyke". (Close as I can figure from the strip, that means she's a lesbian, but don't hassle her if she occasionally sleeps with a guy.) She also concentrates less on strips (though there are some of these, from a period of syndication in alternative papers) than on extended essays, on various themes: her problems trying to get pregnant, working for a sex hotline, butches, the Michigan Womyn's Music Festival, relationship problems, etc.

The art is cartoony-- Liliane herself is an oval with dots for eyes and no nose-- but expressive. (The simple art seems to be an artistic choice: her day job is as a children's book illustrator.) That and Franson's general good humor probably account for the light feeling of the comic, despite the heavy themes that she sometimes takes on. (She rarely expresses political views, unlike Bechdel.)

One added plus is the setting in Montréal, which imparts a slight exotic flavor (as does a sojourn in London). You may enjoy this more if you know French, though she does provide translations for the snippets of French she uses.

How to find it: If your comics store doesn't have it, the bastards, write to Leanne Franson at inkspots@videotron.ca.