I recently read Richard Feynman’s Lectures on Physics, vol. I, and he explained something that none of my professors ever did— an equation he calls an "amazing jewel".

So I thought I’d tell you about it. You can read Feynman yourself, of course— it’s chapter 22— but he was talking to college physics students, and I’m not going to assume you know anything more than high school math. Plus it’s no longer 1963, so I’ll assume you have a calculator, or access to Wolfram Alpha.

The derivative of ex

Let’s start with the number e, which starts

You’ll probably remember e as the base of natural logarithms. But before we get to logarithms, e has some remarkable characteristics.

To see one of them, let’s look at the function y = ex. 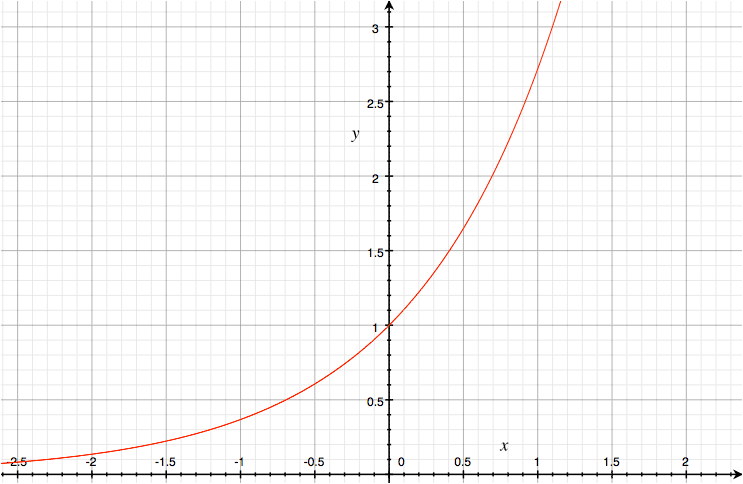 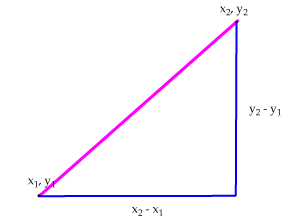 Note: We’re going to be seeing a lot of irrational numbers here. If you see ≅ (approximately equal), that’s a reminder that I’ve truncated the number, which really goes on forever.

So the slope is

Which is close to e. Let’s try a better approximation of the slope, by choosing x2, y2 closer to 1:

As these examples suggest, the slope of ex at any point is ex. That is, the derivative of ex is itself.

This is the only function of x whose derivative is itself. That makes ex very nice to work with in calculus— we’ll get back to that later.

e was originally calculated by Jacob Bernoulli by evaluating the limit

You have a dollar in an account that pays 100% interest in one year; after the year you’ll have $2.

That’s starting to look like e, and if we keep making smaller and smaller divisions, that’s exactly where we end up.

To most people logarithms probably mean "mumble math something", so think of them as exponents, or order of magnitude. If you ask what order of magnitude a million is, you are in fact asking for log10 1,000,000 = 6.

We use logarithmic scales all the time; they’re great for reducing enormous ranges of huge numbers to easy-to-grasp small numbers. Some common examples:

Since we normally use base 10, base 10 logarithms are particularly easy.

For centuries the most useful thing about logs was that they made for easy multiplication of large numbers. E.g. you want to multiply 3.14159265 by 2.7182818. That works out to

Not difficult, but tedious and error-prone. But we can take advantage of the fact that

We can look up the logs in a table... tables to 14 decimal places have been available since 1620.

Of course, these days we do nothing of the sort— we just use a calculator. But it was a huge time saver until the computer was invented.

(Some of you retro-geeks may say "No, no, people used slide rules." What do you think a slide rule is? Among other things, it’s a couple of logarithmic scales.)

There’s an interesting trick for taking powers of 1/n with higher and higher n. Let’s look what happens with e1/n, doubling n each time. (Or to put it another way, take e, then √e, then the square root of that, and so on.) If you’re thinking "Oooh, the limit of e1/n is 1", that’s correct, but that’s not the weird trick. The trick is that a good guess for e1/n is 1 + 1/n, and it’s an increasingly good guess as n gets huge.

We’ll use this trick in a clever way in a moment, but I’ll also point out two things.

Now, all of the algebraic operations— addition, multiplication, exponentiation, and their inverses subtraction, division, taking a root, finding a logarithm— should work on any number, so long as we’ve defined ‘number’ broadly enough. It turns out that complex numbers are as far as we need to go.

All of which means that a function like y = eix should be fine. Now, we can understand raising a number to a power n as multiplying it by itself n times. This is stretched by such ideas as raising it to a fraction or a negative number, and seems almost to break if the number is imaginary. But the algebra all works, so we’ll let the meaning take care of itself.

Still, how do we evaluate an expression like eix? Where do we even start?

We actually have a place to start— the observation from the last section that a good guess at ei/n is 1 + 1/n. Let’s assume that it’s true for complex numbers as well.

and square both sides. Now, (ab)c is always abc, so

For the other side, the general rule for complex numbers is

Let’s see what ein looks like, as a function. (I’m just going to let Wolfram Alpha calculate it.) Here’s how it goes for several values of n. It looks like there’s some patterns here. All the values we’ve seen so far, both for the real part and the imaginary part, live between -1 and 1. Moreover, looking down the real column, we see the value smoothly going down; when it reaches -1, toward the end of our list, it inches back up again. The imaginary column goes up, reaches 1, and then declines.

Circling round the subject

Feynman points out something else of note. Simply from the definition of a complex number, we know that

Now let’s multiply these equations together:

Simplifying the left side:

And the right side:

So for any complex number x + iy that we found as a value of ein, we know that

Does this ring any bells yet? That’s the formula for a circle, so circles are involved in this somehow.

Let’s just get a plot of ein. The red line is the real part, the blue line is the imaginary part.

Those look like sine waves. And they are sine waves! In fact we can write

This is the equation Feynman calls the "amazing jewel" of mathematics. We’re just messing around with exponential functions, and we suddenly arrive at the trigonometric functions.

The equation was first published by Leonhard Euler in 1748.

Rather than plotting ein, we can also plot x and y as n varies. We get this graph: 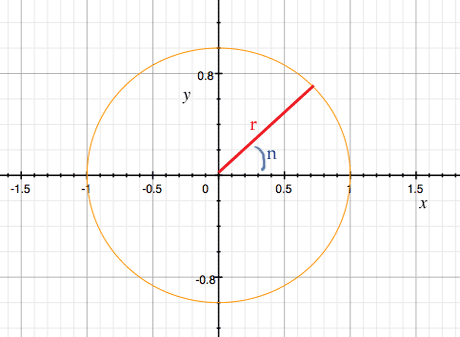 That shouldn’t be surprising, since x2 + y2 = 1 is how you plot a circle. However, it gives us an alternate way of thinking about ein— we can think of n as an angle, as in the picture. The radius r is also shown, and of course it’s 1.

Maybe it looks like a sine wave but it really isn’t? Well, naturally, there are proofs of Euler’s formula. You can look here, or here, or here.

The problem is that to understand the proofs, you need far more math than is needed just to understand e and sin/cos! Euler himself used the limit expansions of en, of sine, and of cosine... but even though it’s true, it’s not intuitively obvious that cos x is the sum of -n/(2n)! × x2n.

Let’s take another approach, along the lines of "use Wolfram Alpha to evaluate limits for us until we’re satisfied we know where this is going". Above I mentioned that Bernoulli’s definition of e was

Now e = e1, so the general formula is

x can be a complex number, so we can also write

You can enter (1 + (i*pi)/2)^2 into Wolfram Alpha, and keep going with higher and higher n’s. Wolfram Alpha will helpfully give you a plot of the results. Here’s how it goes: 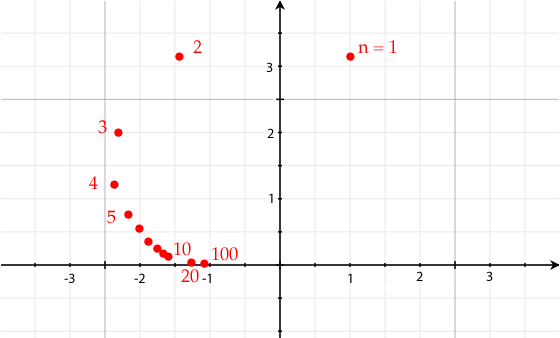 But does Euler’s formula

Now all you have to do is try out every other possible value of x from 0 to 2π. Any number you try, it’ll work.

The good thing about learning your math from Feynman’s lectures is that you almost immediately get a practical application. The bad thing is that to understand the application requires not just following the physical analysis, but having a firm grounding in differential equations.

So to demonstrate the use of complex exponents of e, I’m just going to show one step in a longer derivation. Feynman doesn’t even bother to show the step— he says it’s evident "by inspection"— but I’ll take it a bit slower.

We have a harmonic oscillator (such as a weight held by a spring), driven by a force F, and resisted by friction. The equation is

F is itself defined as F0 cos(ωt + Δ). This makes for a pretty rough differential equation, but here’s where our trick comes in. We pretend that F isn’t a cosine but an exponential, and just ignore the imaginary part. So we use Feiωt for the force and xeiωt for the displacement. (The underlines are reminders that these are complex numbers.) Now the differential equation is

is immediately converted to

The first term is a double differentiation, which becomes a double multiplication by iω. That is,

So the differential equation vanishes, replaced by

If your math is rusty this may not have seemed like an improvement, but again, the clever bit is that we’ve replaced a differentiation with a multiplication, which is far less hairy.

Might as well take the next step: we can divide out eiωt from both sides:

You can see an example of doing all the equations with sine and cosine here, while this page does the same thing with exponentials.

This eiωt business isn’t just a quirk of weights on springs; it turns up all over. It’s a basic part of analyzing electric circuits; it comes up in tidal effects on the atmosphere; it pops up in nuclear physics. Nature is lazy, and uses the same damn equations for everything.