What the translators did to Ranma

See also my review of Ranma in English.

I recently got my hands on the original Japanese Ranma, and I thought you'd like to know what you're missing (besides the fact that they're in Japanese, which you already knew). 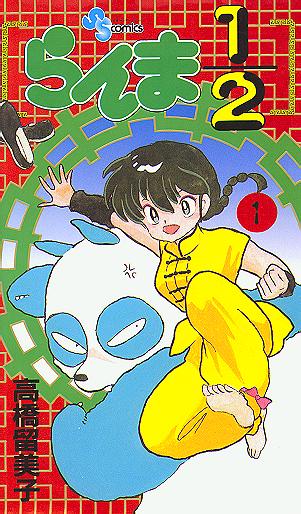 Well, first, they're smaller, and they've got better covers. The Viz covers are elegant in a nouvelle cuisine kind of way, but the Japanese covers have bigger pictures and just look friendlier. Here's the front cover (a foolish Westerner would think of it as the back cover, but we are not foolish, are we?). Thanks to Chris for the color scan.

I bet you know what the big kana at the top say, eh? That's ra, n, ma. People say the Japanese r is somewhere between r and l. They're lying. It's just the same as a Spanish r (but not a trilled rr)-- a flap, as we linguists say. To American ears it sounds a lot like a d. A very proper English accent has the same sound-- thus "veddy" for "very".

Many Japanese folks have Chinese names, and Ranma is no exception. The original Chinese would be Luànmâ and means more or less 'wild horse'.

When I saw the English version, I wondered if they moved the panels around to get them in the right order for Westerners, or just used a mirror image. Turns out it's the latter. Every page is printed backwards in the English edition (even the occasional panel that takes up a whole page or two). Where you see something like the Tendo Dojo sign, however, it's shown the right way; and for instance where Ranma has a shirt with his name on it (in Western writing), the name is redrawn so it reads in the right direction. (The 'Part x' headings at the beginning of each chapter are also, for some reason, printed in English (with helping kana: paato.) The duck on Akane's door also has her name in romaji.)

You may want to know: are you being cheated in any way? Are they leaving out stuff, altering the dialog, making the eyes bigger perhaps? None of that; but yes, you're being cheated. The art is a lot better in the Japanese version. Next to it, the American edition looks like a mediocre Xerox.

Basically Takahashi's studio uses a lot of shading and watercolor effects, and they're mostly lost in the U.S. edition. Look at page 4 of the first chapter, for instance. The dojo sign in the original is really beautifully drawn; in the U.S. edition you can barely read the smaller characters. The sky above the house is blank in our version; in the original, clouds and sun are rendered in watercolor. In the bottom panel, you can see the pattern on Nabiki's bedspread, and even read the poster behind her (it says 'Summer Consert'). Panels that appear completely blank turn out to show the sky with clouds, or a puddle of water with ripples.

For some reason the first 4 to 6 pages of each chapter are drawn even fancier than the rest, with everything shaded-- I'm told that these pages originally appeared in color. (The tankubon edition I have shows them in black and white; apparently the eventual wideban edition will be in color.)

In general the American version is not only poorly reproduced, but appears significantly darker. Take the double-page spread at the beginning of chapter 1, for instance. In the original Ranma is dressed in grey, not black, and her outfit (as well as her face and legs) are shaded. The backpack is drawn neatly enough to serve as an illo for a L.L. Bean catalog.

Considering that these stories appeared in 20-page chunks once a week, and that Takahashi was also doing Maison Ikkoku, Mermaid Forest, Lum/Urusei Yatsura, One-Pound Gospel, and Rumic Theater, it seems pretty clear that we're seeing the work of a studio. Someday I hope we learn how many people worked on these books...

How is the translation? Well, it seems pretty good to me, but my judgment is slightly impaired by my not knowing Japanese. I'm working on this, however. The Japanese Ranma is very tempting, especially because all of the kanji (Chinese characters) are accompanied by their readings in kana (the syllabary). So all you really need to know is the 48 characters of the hiragana syllabary-- it's not much harder than learning the Russian alphabet. (Well, better learn katakana as well, for another 48 signs. It's nothing, really, and you'll feel wicked multicultural. You can learn them easily with some flashcards.)

My translation of chapter 1 isn't ready for prime time-- minor details like not knowing what the heck some of the words mean-- but here's a few notes gleaned so far.