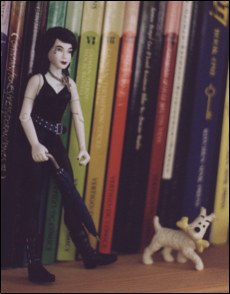 Facts from My Bookshelf

I thought I'd share one fact each from a selection of books on my bookshelf. I've identified the books, but these are not quotations; they're my own summaries of something from the book-- not necessarily a main point. All of these, by the way, are good books to read.
--M.R. When photons hit a pane of glass, they're not reflected off the surface-- they're not reflected at all. They're absorbed by electrons somewhere inside the glass, which then emit new photons out. (Or, of course, they pass all the way though.)
QED, Richard Feynman

You may have been taught that we have "red, green, and blue" receptors in our eyes, and that's how we see colors. There are three types of receptors, S, M, and L; but they respond strongest to dark blue, green, and greenish-yellow, respectively. To get a spectral response, neurons combine the signals from these receptors: L - M codes red/green; (L + M) - S codes yellow/blue.
Color for Philosophers, C.L. Hardin

There are stroke patients who can't see things on their left side. Mrs. S., for instance, would only eat the food on the right half of her plate. Left didn't exist for her. She was aware that something was wrong, however, and had a strategy: she rotated her chair to the right, all the way around, till the 'missing' portion became visible. She could now eat it-- the right half of it. If she was still hungry, she whirled rightward once again and ate another half.
The Man Who Mistook His Wife for a Hat, Oliver Sacks

Knowledge has sometimes been described as justified true belief. Edmund Gettier, however, provided examples to show that these three attributes are not enough. An example: you go to the Louvre to see the Mona Lisa. You recognize the famous image immediately, and are thrilled to be in the same room with the picture. Later you learn that, to foil an attempted theft, the picture was replaced with an excellent reproduction that day. But in fact you were in the same room as the Mona Lisa-- it was hidden behind another picture in the room.
Labyrinths of Reason, William Poundstone

Medieval Europe used horses more productively than ancient Rome. It was actually illegal in ancient Rome to have a horse pull more than 500 kg. The reason was their poorly designed yoke, which strangled the horse if the load was too heavy. Medieval yokes had a better design, resting on the shoulder blades, allowing the horse to pull more than 3000 kg. (This yoke was invented somewhere on the Asian steppes, and introduced into Europe in the ninth century.)
The Medieval Machine, Jean Gimpel

A Book of Bees, Sue Hubbell

Grades of maple syrup (one scale is Fancy, A, B, C) date back to when producers produced mostly maple sugar, in direct competition with cane sugar, and the goal was complete absence of maple flavor. If you like the flavor, you might want to try A or B instead.
First Person Rural, Noel Perrin

Gypsies and gadje (non-Gypsies) both seem unclean to each other. For the gadje, it's that Gypsies live in squalor and dress in rags-- they don't venture into Gypsy homes, which are maintained with obsessive, ritual cleanliness. Gypsies, for their part, consider some of the gadje's customs to be filthy-- keeping dogs and cats (animals which lick themselves, making their insides dirty) as pets, for instance.
Bury Me Standing: The Gypsies and Their Journey, Isabel Fonseca

Many ghetto neighborhoods are declining spectacularly in population. The Chicago neighborhood of Woodlawn, for instance, went fom 80,000 people in 1960 to 24,500 thirty years later. Those who are left are increasingly unemployed: in 1950, 69% of black adults in Bronzeville (the southern spur of Chicago's black belt) had jobs; in 1990 the figure was 37%. Joblessness leads to a breakdown in society, and correlates with the rise in crime and drug use.
When Work Disappears, William Julius Wilson

It's possible to tell the age, status of the wearer, as well as the historical epoch and much else, from the appearance of a kimono. A proper wife, for instance, ties the obi (the stiff, wide sash) just below her breasts; a young girl wears hers even higher; a geisha, lower, giving the garment a more voluptuous line.
Geisha, Liza Dalby

Ants recognize intruders to the colony solely by smell. Parasites will look entirely unlike ants, but if they smell right they'll be accepted and even taken care of. Some can even beg food by making the right touch signals. There are body parasites which are, by comparison to the ants, grotesquely large-- it's as if we had tapeworms the size of snakes.
Journey to the Ants, Bert Hölldobler & Edward O. Wilson

The Amish are flourishing: their community has grown from 5000 in 1900 to over 100,000 today. They've grown so much that there is no longer enough farmland to support them all. Too much mixing with the rest of us would imperil their way of life; but it hasn't proved necessary. Instead, a web of Amish-run support businesses has sprung up-- stores, carpenters, plumbers, painters, cabinetmakers, mechanics. If anything this has strengthened the community: before, many services were provided only by the "English"; now the Amish can get them within their own community.
The Riddle of Amish Culture, Donald B. Kraybill

Bacteria are constantly getting into your eggs. Not to worry: egg white contains powerful antibacterial agents. Lysozymes burn open the invaders' cell walls; in addition, proteins wrap themselves around the floating minerals and vitamins before the bacteria can reach them for a charge-up. Most bacteria die long before reaching the nutrient-rich yolk. Milk has similar defenses (the burning agent is hydrogen peroxide). So do your eyes.
The Secret House, David Bodanis

The Imperial Chinese examination system began with five-day examinations at the county level; this was only the first rung of a six-rung ladder. Candidates brought bedrolls, food for the duration of the test, chamber pots, ink stones, brushes, and paper, and in their heads, half a million characters of text from the ancient classics. Examiners knew the candidates only by number, and did not even see the candidate's handwriting-- they worked from copies made quickly by copyists. Perhaps one in a hundred candidates would pass.
The Great Chinese Revolution 1800-1985, John King Fairbank

I used to play chess with family members, and absorbed some vague ideas about moving toward the center of the board, the value of exchanges, the usefulness of rooks, etc.-- all of which proved useless when I played my college roommate. I was goaded into studying, and I learned that the next stage of the game involved combinations-- forks, pins, discovered checks, and other moves that force a certain response, to your advantage.
Winning Chess, Fred Reinfeld

The CIA, eager to find a use for the army of Cubans that had failed at the Bay of Pigs, sent them to the Congo to fight the rebellion of the Simbas, which sputtered in the neighborhood of Kisangani for five years, while U.S.-supported dictators ruled in Kinshasha. Castro, not to be outdone, sent Che Guevara and several hundred troops to help out the Simbas. For a few years in the mid-'60s, the Cuban civil war resumed, 8000 miles from home.
Endless Enemies: The Making of an Unfriendly World, Jonathan Kwitny

The Incas had no writing, but recorded accounting information on quipus (kipu is the the Quechua word for 'knot'; we got the qu as the word passed through Spanish). Quipus consisted of a main cord with any number of color-coded subsididary cords dangling from it (a few have thousands); sometimes these had subcords of their own. Knots on the cords represent numbers in base ten-- essentially, one knot per digit, so that five knots close together mean 5. The units digit is encoded using a different type of knot, so that it's always clear where a number ends, and a cord can contain more than one number. How do we know that this analysis is correct, and the knots don't represent something else, like letters? Simply enough: because the quipus very often include totals and subtotals. One particular color cord, for instance, may contain the totals for the other cords in that group. Sometimes there are several levels of subtotals. It would be vanishingly unlikely for these relationships to exist by chance.
Native American Mathematics, ed. Michael P. Closs; the Inca essay is by Marcia Ascher

The French they teach you in school is that of the 19th century. What the French actually speak is considerably contracted. You might have learned to say Ce pantalon ne me va pas bien ("These pants don't fit me"); what the French say is I m'va pas ben, c'pantalon. Plus, there's a slang word for everything. There's usually a node of verbs-with-clitics in the middle of the sentence, allowing free movement of the actual noun phrases; the morphology is strongly reminiscent of the Bantu languages.
Street French, David Burke

Japanese students probably do learn the 1,945 characters that comprise the official government list; but within a few years they forget how to write more than a quarter of these.
The Chinese Language: Fact and Fantasy, John DeFrancis

Working out a schedule for a programming project, the easiest thing to estimate is coding time; the hardest thing is testing time. Few programmers or managers would dare allot half the total project time to unit and systems testing. However, that's what actually happens more often than not. This is one of the chief reasons projects get late.
The Mythical Man-Month, Frederick P. Brooks Jr.

Benjamin Franklin was a schemer-- a schemer for good works. He wanted to start a hospital, for instance, and proposed to find private donors and get matching funds from the state. (When he had a proposal, by the way, he liked to be modest about it-- he'd say "some gentlemen friends" were proposing it. This softened personality-based resistance... and generally he'd ultimately get the credit anyway.) Noting that many legislators scoffed at the notion that he could privately raise 2000 pounds, he proposed a conditional appropriation, to be made only if this figure was raised. Now many assemblymen could vote for the measure convinced that they would never have to pay; and Franklin could tell subscribers that their contribution would be doubled by the Assembly. P.S.: He got his hospital.
Autobiography, Benjamin Franklin

The Medievals did not believe in a flat earth; they believed it was spherical, and writers such as Mandeville and Dante show that they understood that down points in different directions in different parts of the earth. They also knew that the universe was immense-- the stars, for instance, were said to be larger than the earth; and the South English Legendary says that if a man could travel upward at forty miles a day, he could not reach the fixed stars in 8000 years. (That is, they're more than 116 million miles high.)
The Discarded Image, C.S. Lewis